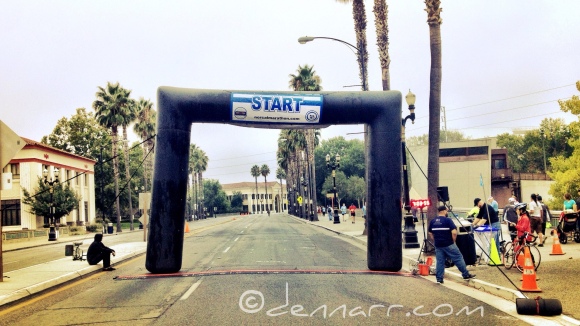 This past Sunday, I ran the NorCal Half Marathon in downtown San Jose. The race was actually two runs in one: a 5k fun run and the half marathon. This was the second year for the event, which also had a marathon in 2011. The marathon had to be cancelled this year due to paving work taking place on the marathon course. The 5k was added in place of the marathon. The race drew 659 participants, with most running the half (5k: 64, half: 595.)

The weather was great: nice cloud cover, mild temp, no wind to speak of, and the sun breaking through between 0930 and 1000.

The half marathon course was a series of out and back routes that made their way from and back to the start/finish line area. The flat and fast course was split between city streets and the Guadalupe Trail system, which is a paved urban trail. The only “hill” was the Coleman overpass near Route 87 – which really wasn’t a hill at ~20′. Course marking was excellent and there were volunteers everywhere to make sure people stayed on course. While it was OK when I was running, I expect that the course probably got crowded on the Guadalupe Trail portion once the main pack of runners got there – especially on a few portions where runners needed to run on the opposite side of the trail to enable flow.

At the finish line, there was some food and drink for runners and a few vendor booths. The same group that put on the Pleasanton Half Marathon [my race report] ran this event. It seemed like Pleasanton was more of a draw for vendors and such.

All in all though, the NorCall Half was a well-organized race and all I saw were happy runners – which is a wonderful thing.

I read this quote a while back:

I need to re-read that before each race, maybe write it on my water bottle, tattoo it on…

When they called for runners to line up, I placed myself near the 1:45 finish pacer (8:01 pace) – which is a pretty aggressive placement for me. Maybe it was the fact that I wore my Run It Fast Club tech shirt, Jesse Thomas aviator sunglasses, and felt I needed to “represent.” Maybe I had my eyes on a PR – I don’t know…

I regrouped and slowed the pace to probably what the first part of the race should have been paced at – though I was still pounding out a positive split pace for miles 8-12 (splits of 8:17, 8:22, 8:53, 9:03, 9:03.) The damage was done, though I did grit out an 8:27 and 7:21 for miles 13 and the final .1! During my “regroup”, I told myself that it was OK to pull back (it was happening regardless), but that I WAS NOT GOING TO LET THE 1:50 PACE GROUP PASS ME! In the end, that goal was met. After the race, I found the 1:45 pacer and asked how he finished. He said right on time and, according to the results page, he actually finished at 1:44:06 – pretty good pacing. He also shared that only one of the original group stayed with him the whole race.

Bottom line: I am happy with my race; and, like all of them, it was a learning experience for me. That’s what running is all about anyway, isn’t it?

Post-race meal: Country Fried Steak, mashed potatoes & gravy, and broccoli at Chili’s…(probably won’t do that again – way too much salt!)