It was rainy for my 5-mile, training run yesterday and drizzly for this morning’s 8-mile.  Rain doesn’t stop me from running – at least not yet.  As I headed out both times, and all during my run, I kept thinking, “It’s training runs like these that made the rain on Sunday something to plan for, not worry about.”

Weather. The weather was forecast to be rainy and it was.  The rain varied in intensity, but there was liquid falling from the time I left the parking garage at the de Young Museum for the start area until I walked back into the garage after the race and jog back from the finish line.  The temp was 45 (fells like 42) at the start and it warmed up only slightly over the course of the time I was at the venue.  As for wind, it varied from 5 mph to something close to maybe 10 along the coast – which was a headwind for miles 8-10 and a tailwind for miles 11-12.75.

Course. The course is a net downhill – read: FAST!  It starts in Golden Gate Park near the de Young, heads east for two miles around the Park’s panhandle, then heads back west through the Park.  Once you get to the pacific (~mile seven), it turns south and runs along the coast on the Great Highway.  At mile 10, runners make a u-turn and head back north.  At mile ~12.75, runners make right turn and hit the final stretch, which is a slight incline…just to tease the runner.  The whole course is on the road.

Management/Support. Course management, support, and the volunteers were AWESOME!  The rain did not impact that aspect at all.  While I didn’t use the water/electrolye stops, they were clearly marked and, just ahead of them, a volunteer was letting runners know there were ahead – which is great.  I also liked that at each mile marker, a volunteer is calling out the elapsed gun time.

Post-Race.  The post race area was excellent.  The post-race shoot and expo were laid out great – clearly marked as to what was where (water, shirts, etc.) and good flow. Despite the rain, there was a full assortment of SWAG (food samples, etc.) and info/exhibitor booths to browse around.  I actually only noticed one booth that was empty, so all the vendors/exhibitors showed up even though it was pretty wet.

Medal/Shirt.  The race didn’t offer finisher medals, which is actually standard for this event.  They offered them last year, since it was the 30th anniversary.  The event shirt was actually a very nice, long-sleeved, cotton shirt (photo below.)  I actually like the 2014 shirt better than the 2013 version.

For this race, I had one goal: a new half marathon PR.  Based on last year’s time and my training since then, especially the last month, I knew a PR was totally achievable.  I also knew that I had written/felt that way before (2013’s SJ RnR half and ZombieRunner Quarry Lakes marathon for example) and totally blew it in execution.  With that in mind, I didn’t set a wildly aggressive PR goal, but one that I felt would be a challenge yet within reach: 1:43:45 – which would be a PR by one minute.  So I planned for that, working out a pacing plan using the free “Generic Flat Half Marathon” spreadsheet from MyMarathonPace.com – a great resource…check them out. I wrapped it in packing tape (DIY waterproofing) and taped it to my bottle for reference during the race.

Start time was 0800, so I planned to get to the venue by at least 0700. I made the drive to San Francisco getting to the de Young museum parking garage and chilling for a bit. I suited up I the car (compression sleeves, etc.) and headed out to the start area. I hung out in the warm and dry car too long and had to rush around to hit the port-a-potty, gear check, and run back to the start.

I lined up toward the 8:00 pace section and waited with the growing mass of runners for Go Time. I had layered jackets for the walk to the start (my Better Than Naked for the race, covered by an L.L. bean waterproof jacket), changing in the port-a-potty to my race kit and covering up with a garbage bag until just after the National Anthem. It was nice to start the race with a dry torso at least – my head and feet were wet already. No worries though – I’m fine with running I the rain! The start bell (a la cable car) rang just after 8 and we were off!

As I thought about my race after I finished and now, days later, I don’t actually remember much. I got in a zone and stayed there most of the race. I do know that as I started, it was crowded and quite a few people had lined up in a faster corral than they should have – I was passing quite a few people for the first few miles, doing the zig zag/weave thing through traffic.

The miles clicked by and I was on a faster than planned pace, but kept going. I felt good and wanted to stay strong and consistent on the first half, since it has slight rollers, and prepare for miles six and seven, which are the speedy downhill section. I didn’t even look at my bottle until mile six just to check things out.

I crossed the line at 1:42:42 with a grimace on my face, according to the race photos (scary pic to the right.)  I walked for a bit before hitting the port-a-potty and post-race expo. So, I beat my goal time of 1:43:45. Actually, my gun time was 1:43:44 – one second faster than goal! I was tired at the finish, but not totally wrecked – which bugs me now, because maybe I could have given more or pushed through a few of the quick walk breaks I took. Next year. I think I can set a new PR for sure.  Hmmmm?

After milling around the post-race area, I did what I did last year and ran an easy, 2-mile, recovery run back to the de Young parking garage. This difference this year was that it was still raining! Last year’s weather was sunny and cool. They did have buses back to the start area, but doing an easy run was a nice way to unwind!

Fueling. As for carb loading, I followed my normal routine: 36 hours of >80% carbs and +500 calories above my normal day. I also followed my usual race fueling plan: bagel and jelly at -3 hours, GU at -45 min, GU & salt tab at -15 minutes, and GUs and additional salt tabs along the way – plus 20 oz. electrolytes during the race.

Starting line view – ahead of me

Starting line view – behind me 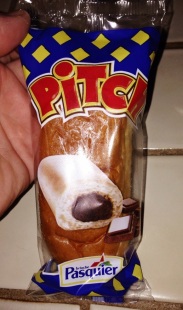 THE BEST SWAG of the day…YUMMO! (must find where they sell these!)

© 2016 Dennis Arriaga, dennarr.wordpress.com, & dennarr.com. Unauthorized use and/or duplication of this material without express and written permission from this blog’s author and/or owner is strictly prohibited. Excerpts and links may be used, provided that full and clear credit is given to the author with appropriate and specific direction to the original content. Any linked and referenced items remain the property of and retain the copyright privileges of the originator.
%d bloggers like this: