How Would Jesus Tell The Christmas Story?

You may have heard of WWJD (What Would Jesus Do) or the lesser known HWJD (How Would Jesus Drive), but have you ever wondered:  How would Jesus tell the Christmas story…the story of His birth?

It’s an interesting question.  There’s no book in the Bible that was written by Jesus (at least in the sense that He was the human author); thus, we don’t have that to go by.  The Gospels were written by men under the inspiration of the Holy Spirit, so that somewhat qualifies, but it really isn’t a telling of the Christmas story by Jesus Himself.

So, How Would Jesus Tell The Christmas Story?

Well, we actually do have some idea about how Christ would tell His story from the Bible.  It’s in a passage that jumped out at me while we were doing the Bible in 90 Days program at church this past summer.  I’m certain I’ve read the passage many times before, but this time it stuck – and in the context of reading the whole Bible in three months…it was HUGE.

You see, in Luke 24:13-27, Christ tells two of His disciples His story…His whole story.  (They were kept by God from recognizing Him until later that day – certainly God’s plan to ensure that they knew without a shadow of a doubt that Jesus was the Messiah – the fulfillment of God’s promise and the prophecies they had been taught for many years.)  In this passage, we read about a conversation Jesus had with them over the course of the seven mile trek between Jerusalem and the village of Emmaus.   Verse 27 says that, “…beginning with Moses and all the Prophets, [Christ] explained to them what was said in all the Scriptures concerning Himself.”

That’s a TON of info in the space of about 2 hours and 20 minutes!

So, we do have a Bible-based idea on how Jesus would tell the Christmas Story!  As we read in Luke, Jesus would have included the BIG picture of His story…not just the “manger scene”; which is, of course, crucial.  That OVERALL PICTURE is MASSIVE when you think about the fractional story we tell, think, and sing about each year (at a time that gets earlier and earlier).

[Whoa, Dennis!  It’s only November 10th…aren’t you buying in to that
“earlier and earlier” thing?  Where are you going with this?]

OK.  I do have two points here:

First, let’s not settle for the condensed or partial Christmas story.  Why not enjoy, remember, and tell the Christmas story the way Christ told it to those two disciples on the road to Emmaus.  That’s a challenge to myself as well as anyone who gets this far in reading this longer-than-usual post! 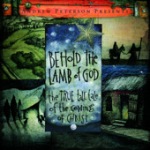 Second, about this time of year, many of us get out our favorite Christmas albums or start to look for new ones for our Christmas Season listening pleasure.  In order to enable my first point, I want to plug a Christmas album that has quickly become one of my favorites.   It’s an album that tells the Christmas story as Christ told it (a la Luke 24:27).  The album is Andrew Peterson‘s, Behold the Lamb Of God – The TRUE Tall Tale of the Coming of CHRIST – which is actually celebrating it’s 10th anniversary with a 2-disc anniversary edition being released tomorrow (11/11).

The album tells the Christmas story beginning with Moses, moving to the prophets, to Christ’s birth, to John the Baptist’s “Behold, the Lamb of God, who takes away the sin of the world!” statement – all pointing to Christ’s death, burial, and resurrection as the Lamb of God, our Savior…all through lyrically-deep*, folk-style songs.

If you are not familiar with this album, it is different – but in a good way.  Like so many “familiar” things, we risk becoming numb to the words and message without a fresh look…or listen.   Specifically in this case, I think we cheat ourselves if we don’t recall and cherish the complete and utterly amazing story of Christ and Christmas.  The story of God who, long before Mary, Joseph, and the manger, had an amazing plan of redemption – that really places the manger in the middle of the complete story.  If you’re familiar with this album, hopefully you know what I’m talking about.

I HIGHLY RECOMMEND this album.  I get no creds for this; in fact, I don’t consider this a “review”, simply a recommend or plug.  If you’d like an actual “review”, here is an informative one.  Also, if you don’t want to get the 2-disc set, at least get the single CD.

So again, this year let’s not settle for the partial Christmas story.  Let’s enjoy and remember this amazing, TRUE story the way Christ told it.  (BTW, the album is only about 45 minutes long and you can listen to it sitting in a comfortable chair – hiking is not required!)

JANUARY 8, 2010 UPDATE:
Listen to the album for free, via an online payer at this link.

*OK, there is one lyric that I have an issue with.  On the first song, the line “He reigns with the angels” bugs me theologically.  I may be taking Peterson’s “with the angels” out of his original context though.  Don’t let this stop you from enjoying – singing “Father” place of “angels” works well if it bugs you!