March 2014: Completed my first multi-sport and have now returned to a run-focused training plan/schedule.

Yep, I can now say I have tried multi-sport – a duathlon, to be specific.  Not just “tried,” I’m hooked…though I am not planning on doing any others in 2014.  I thought about doing others this year; but, at this point, I have too many other running-focused goals set for 2014 to insert training for duathlons and definitely don’t have time for triathlon training.  I will certainly be back for the 2015 South Bay DU and possibly give triathlon a go.

This month, I also decided on the rest of my 2014 schedule.  I’ll share that in a subsequent post, but it’s gonna be a fun and challenging 2014!

No biz trips this past month – WooHoo!

As far as new equipment & such: 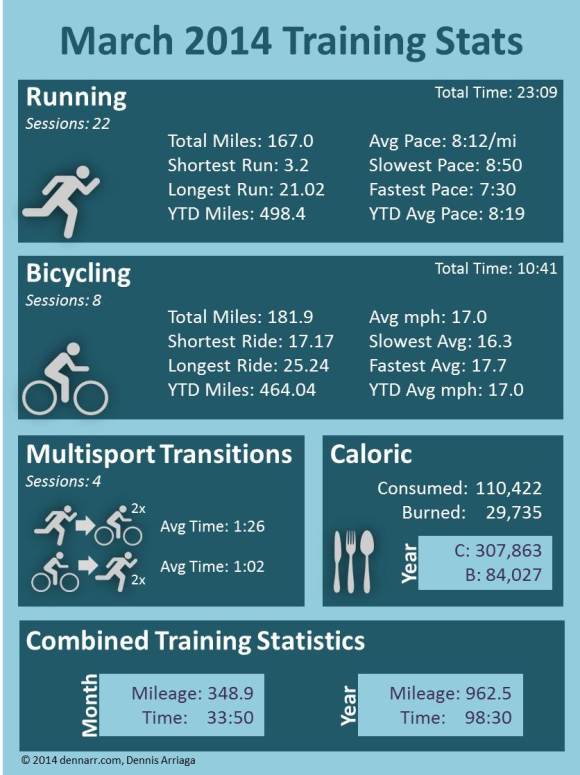 Be the first to start the conversation!

© 2016 Dennis Arriaga, dennarr.wordpress.com, & dennarr.com. Unauthorized use and/or duplication of this material without express and written permission from this blog’s author and/or owner is strictly prohibited. Excerpts and links may be used, provided that full and clear credit is given to the author with appropriate and specific direction to the original content. Any linked and referenced items remain the property of and retain the copyright privileges of the originator.
Loading Comments...
Comment
×
%d bloggers like this: