This past Sunday, I ran the 2012 edition of the U Can Finish 5 mile & 2 mile race in Orlando, FL. Yes, Orlando. I had to travel there for business and, since I needed to travel on Saturday for a Sunday PM meeting, I checked the web for Sunday morning races in the area and found this one! I thought, “why not!” So, after checking with the organizer to make sure it was open to “out of towners”, I registered.

The race, held at the University of Central Florida and organized by a running store called Track Shack, was actually three races in one event: a 5 mile, a 2 mile, and a combined time of the two called the “Distance Dare.” They timed the 5 & 2 distances so people could run both – the 5, then the 2 mile. Finishers of the “Distance Dare” got a special medal. They also had a few races for kids as well. The overall event drew a good crowd: 1,385 for the 5 mile, 831 for the 2 mile, and 417 runners took the “Distance Dare.”

The weather was nice and clear. The announcer kept saying that the weather was cooler for this race; but, that is relative. Being from California, “cooler” to a Floridian is a lot different than someone from the San Francisco Bay Area! Still, it was good running weather. 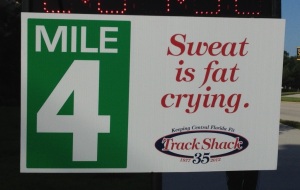 I think I cried off at least a pound!

The course was flat and made its way through the central part of the UCF campus. There was a slight breeze on most of the course, though running through several of the quads was pretty stifling because of the close buildings or covered walkways. They had a great amount of volunteers staffing the course making sure people didn’t take wrong turns and, at the same time, cheering everyone on. Because of the course’s layout, I saw many families at multiple points on the course cheering on their runners…which was pretty cool!

The finish line had a great supply of water, bananas, sports drink, and such; as well as a few vendors. They also had a VIP option (for a few extra dollars) that had better food options as well. I hung out for a bit, but left to go back to the hotel…and escape the heat!

The U Can Finish was a great race. It is actually part of a whole series of races put on by the Track Shack and supporting sponsors. From the looks of their website and the draw at the race, they know how to put on a great event.

I’m happy with my times! Just over an 8 minute pace for the 5 mile and just under 8 for the 2 – I’m not gonna complain! My splits for both distances were negative, so I’m happy with that – since it means I was pacing slower at the start as I need to do better at all around (based on my last two races.)

Not one to take too many photos during races, here are a few from the race: 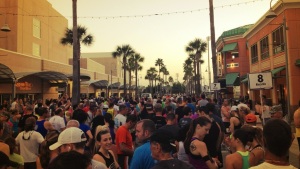 Start crowd for the 5 mile race 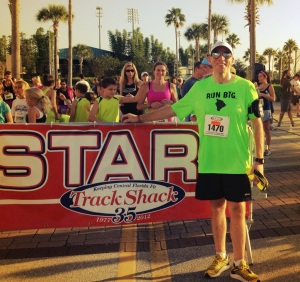 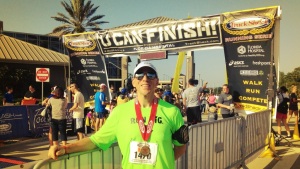 Finished! (get me to an air-conditioned environ!)

Pre-race & race-day fuel: Since I was on travel and these were not long distances, I didn’t do any carb load or specific pre-race nutrition. I did eat a pack of GU Chomps and drank 20oz of GU Brew during both races.

Bottom line: It was a blast to run, though I prefer California weather conditions. Having said that, I bet the weather for the Honolulu marathon will be similar…

Post-race meal: After the race, I ended up eating a Panda Bowl and heading back to the hotel…only to then head out for my planned, Monday, long run of 18 miles. I was pretty drained after that (running 25.38 miles total in upwards of 85-degree weather) and ended up having my “fun” post-race meal that evening – the special at Cracker Barrel: 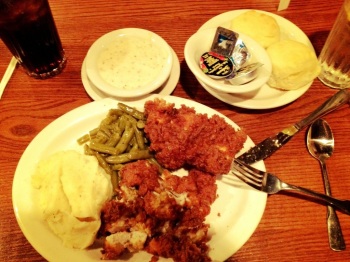