[NOTE: I’m writing this over a month late, so I know more about my “knee” issues now. At the time of this run, I didn’t really know what I was dealing with…]

The weather was perfect – about 59 at the start and increasing to the high 60s at the finish, no wind to speak of… Again, perfect!

This was my second San Francisco Marathon event, doing the First Half last year. I will say, the Second Half is more calm and sedate. I’m sure that has to do with the fact that it isn’t as scenic and, thus popular, as the First Half. The start line is pretty calm as well – with no real control over the waves. I’m not complaining, just commenting.

The Second Half’s course starts in Golden Gate Park, loops through sections of the Park, passes through Haight/Ashbury, the Mission District, into Mission Bay, and passes AT&T Park, finishing just before the Ferry Building at the same finish line as the Full Marathon. As for elevation, it was a nice steady climb of about 200′ over the first four miles, then level/mild rollers, followed by a pretty steep downhill section (260′) over about 1.5 miles, then pretty much pancake flat for the final few miles.

At the finish line, which was the same as the Full Marathon’s, there was food and drink for runners. It was really a great atmosphere to recover from the run. I breezed through it twice actually(!) and then headed to pick up my sweats bag. I took the leisurely walk back to my car and drove home…with a smile!

I came to the race not knowing how I would do because 1) my knee had been hurting me for about a month and 2) I had been through a period of doctor-recommended, complete rest two weeks before. I considered not running for a few seconds, but that was quickly replaced with the thought that I had to complete the Second Half to get my Half it All Challenge medal.  I WAS NOT going to miss out on that!  With a 3.5 hour time limit, I knew I could basically walk my way to getting that bling…but I certainly wasn’t going to get it by not even starting!

Given that, it was all about managing any knee issues and coming up with a viable strategy. I actually decided to use the Galloway RUN-WALK-RUN™ process that many people successfully follow. Using the calculator on the Galloway website, I settled on a strategy for running 4 minutes and walking one. I tested it out the week before on my training runs and it seemed to make the knee pain manageable and I was still running at a respectable, overall average pace. The biggest thing I had to get over was that it slowed my pacing considerably – by well over a minute from what I was used to.

The other thing I decided to change was my shoe selection for the run.  I usually wear my Saucony Kinvara 3s, but decided to switch to my cushy Hoka One One Stinson EVOs.  Even though they are trail shoes, I figured they would provide some welcome cushion to my run – especially with the downhill section that showed up on the Second Half’s elevation chart.

I also decided I would get my knee taped at the KT Tape booth at the expo.  I had just started using KT Tape, and wanted to make sure it was “done correctly” for the run.  I ended up getting a lateral knee and full knee application…just to be thorough.

That said, I was a GO on strategy and equipment!

Since the Second Half starts about 3 hours after the full/first half marathon starts, I drove up to the City early that morning instead of staying overnight. I will say that parking was a breeze! They offered a reservation service that worked like a charm and I got there in enough time to park, chill in the car, leisurely walk to the main start area on the Embarcadero, hit the bathroom at the Hyatt Regency, watch some of the start waves for the Full/First Half before checking my sweat bag and heading to the shuttle bus to the Second Half start in Golden Gate Park. Let’s just say, I was rested and ready to run!  [I was avoiding thinking about my knee!]

As I mentioned above, the start area for the Second Half was pretty chill compared to the main start area. People were hanging all over the place around Spreckels Lake, taking it easy, and even watching the full marathon runners go by in one of the areas. I got there early, so I was able to hit the port-o-potty a few times while I waited for the start. One thing I noticed that they had that isn’t present at the main start were patio-type, propane heaters! They had then scattered around the start area and people were huddled around them, as it was a bit chilly. I wore my sweats and kept them on as long as I could before checking them – I shivered a bit, but it wasn’t too bad.

I was in start wave 2 and had decided that I was going to drop down to wave 3 or 4, given my 4:1 run/walk ratio strategy. As I started to walk over to the other waves, I looked at my fellow wave 2 runners and thought, “I can keep up with them!” – so I stayed in wave 2. My plan was to stick to the side of the course so, when I hit the walk segments, I didn’t clog traffic. It actually worked pretty good, and I was able to pass-then be passed-then pass again throughout most of the run.

Based on my right knee’s behavior on the few runs I had before the race and following the 4:1 run/walk ratio, my goal was 2:18:00 @ ~10:32 pace for the day. I ended up doing better than that and was extremely happy with the results. I was a bit stiff at the end, but not too bad…I got my bling!

Here are some pictures from the day:

The view from Wave 2…

Chillin’ at the start… 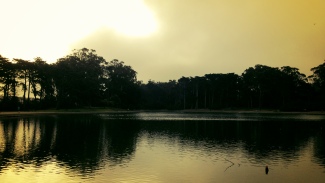 Perfect day for a run! 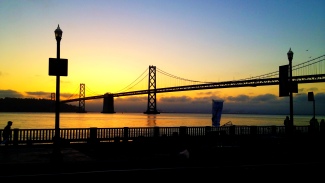 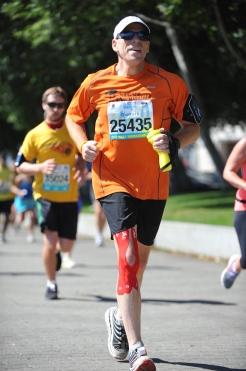 [smile for the camera, glad I’m not walking!] 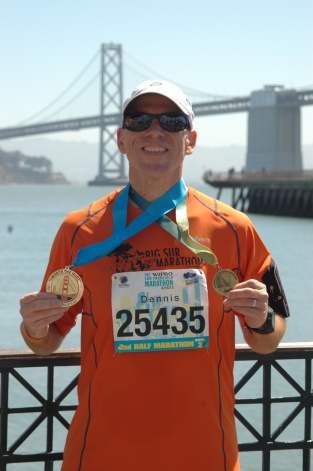 Showing off the bling!

First Half, Second Half, and Half it All Challenge Bling! 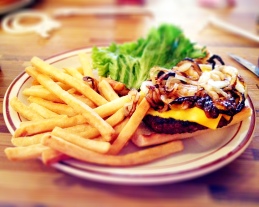