VIR: The Mission to Get Osama Bin Laden [@NewYorker] 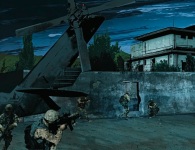 “Shortly after eleven o’clock on the night of May 1st, two MH-60 Black Hawk helicopters lifted off from Jalalabad Air Field, in eastern Afghanistan, and embarked on a covert mission into Pakistan to kill Osama bin Laden. Inside the aircraft were twenty-three Navy SEALs from Team Six, which is officially known as the Naval Special Warfare Development Group, or DEVGRU. A Pakistani-American translator, whom I will call Ahmed, and a dog named Cairo—a Belgian Malinois—were also aboard. It was a moonless evening, and the helicopters’ pilots, wearing night-vision goggles, flew without lights over mountains that straddle the border with Pakistan. Radio communications were kept to a minimum, and an eerie calm settled inside the aircraft.”

Read the rest at:

The Mission to Get Osama Bin Laden : The New Yorker.

At What Point Is It Simply Too Much?

I know there is a need for news and information, but…

At what point is it simply enough?

At what point does the coverage transition from information providing to sensationalizing?

When is the need to know trumped by stepping back and letting people get help, recover, and grieve … in private?

Do I really need to know everything about everything?  And is that even possible or necessary?

Is this “need” simply a western-culture creation?  Does this level of information actually benefit me?

What is your take on this?