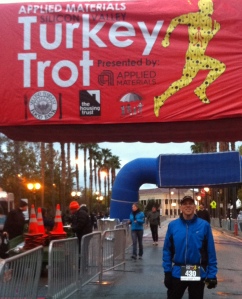 So I ran with the masses this morning in the 7th annual, Silicon Valley Turkey Trot held in downtown San Jose. Masses meaning that the organizers reached their capacity for registrants: 21,000, though according to the Race Central results site, only 16,311 runners actually ran this morning.

All in all, the event was pretty organized and well run. The cuing of the various races was great, with well-labeled holding areas for each running group. The post-race expo was crowded, but set up so people flowed through efficiently. SWAG was decent.

The weather pretty much cooperated. Showers were forecast, but it ended up a light drizzle before the race and tapered off as the morning progressed.

I stayed for the Elite 5K races, which was pretty cool to watch. I get stretched at my “speedy” 8:44 pace – I can’t imagine running at half that! The Mens Elite winner, David McNeill, set a new course record at 13:33 at a 4:22 pace…WOW! 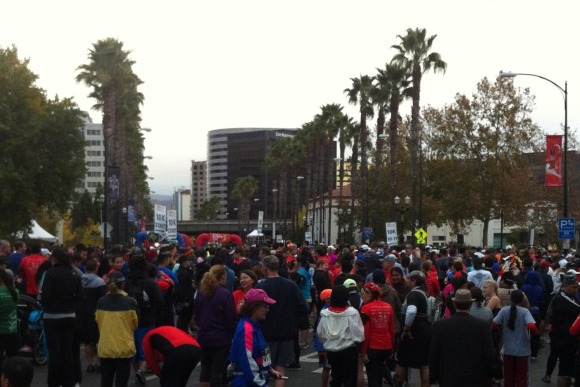 This was my second 5K, having completed the Couch-to-5K program on November 10 and running my first 5K last Saturday in Pacific Grove. Actually, a billboard for the Turkey Trot was what prodded me to start running, so this morning was the “full circle” of the C25K process.

With the 5K start time at 0815, 21,000 registrants, and rain in the forecast, I decided to get an early start. Actually, not as early as my normal weekday, but I was up at 0430 and on the road by 0600. Of course, I got there in no time and the crowds were no where to be seen (at least that early.) I sat in my car with the heater and seat warmer on, chilled with the ol’ iPhone, and called Karen a few times. It was drizzling a bit, but I headed down to the race area at about 0650, visited the porta-potty, and walked around. As the start time got closer, I did some warm up sprints, made a final porta-potty stop, and queued up with the masses. 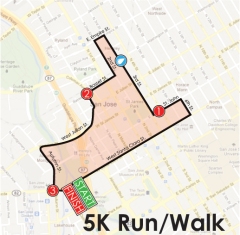 Start time came and all 10,419 of us 5K’ers began to move. I hit my Garmin’s START button at 0823 and headed out on Santa Clara Street. I tried to force myself to stick with my pace, but found myself running a little bit fast. I pulled back a bit and settled in on a comfortable pace. At home, as I reviewed my Garmin data, I see that I ran the second mile at a faster pace (8:31) than miles one (8:50) and three (8:56). The interesting thing is that I did much the same thing in last weekend’s 5K. I guess working on better pacing will become part of my training process.

There were two things that were frustrating…

The first was that with so many walkers (the 5K was a run/walk), I spent a lot of time dodging walkers – like the old Frogger video game. People were walking all over the place (not just “to the right”) and in groups. I realize I probably sound like a crusty/jaded/snobby runner…it just would have been great if the organizers had asked walkers and people with strollers to line up at the back of the start area. The race organizers at the Pacific Grove Lighthouse 5K did this last weekend and it worked really well. I’m not sure if this would have resulted in a faster time/pace, it just would have been one less thing to have to concentrate on.

The other frustrating part was the finish line. It was basically a wall of people and in order to avoid a massive pileup, you had to effectively stop running/slow down well before crossing the finish line. The wall of people was basically the result of having the entry to the expo area too close to the finish line – and I think they had the 10K finishers cross the 5K lane to get to the expo. Again, this was probably not a huge impact on my time, just a frustration. It was part of the chatter I heard while waiting in various lines at the expo…so it wasn’t just me.  [see below for a post-post update from the race organizers]

Anyway, other than those two things, the race was great and I had a fun time! I will be trotting next year – though it will be the 10K…

I started out bummed that my time this week was slower than last weekend’s race (26:56 vs. 27:31); but, they were actually about the same from a pacing standpoint (and probably overall.) It turns out the PG Lighthouse 5K was not a full 5K in distance (it was closer to 3 miles, due to race route controls).

I’m Happy with my results. I am sub-30 minutes, which was an original goal and feel that I again accomplished these three goals from a Jim Galloway book I’m reading:

Um, I am doing it again.

On Saturday I’m running my third 5K in eight days: the Quarry Turkey in Fremont.

Finally, my post-race lunch was even a treat from McD’s. I typically avoid those yellow things on the left and even the sandwich on the right! 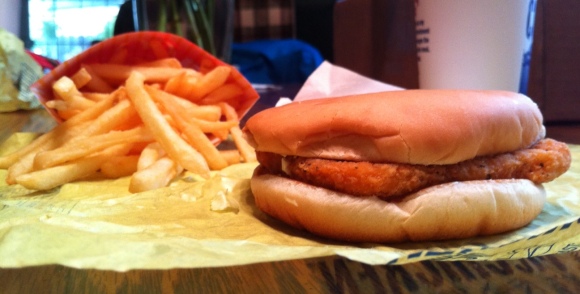 Karen has a cold, so the rest of the day will be spent hanging out together, resting, watching TV, possibly taking a nap, and – of course – being thankful.

All runners received an email from Carl Guardino, Silicon Valley Turkey Trot Race Founder and Director on November 29th.  The email provided an update on the fundraiser aspect of the race and also addressed the “finish line” comments they’d received.

Kudos to Mr. Guardino and the whole team for addressing this!

Thank you so much for being a part of our event this Thanksgiving.  Thanks to your support, we have raised more than $600,000 for our three beneficiaries; Second Harvest Food Bank, the Housing Trust of Santa Clara County and the Children’s Health Initiative of Santa Clara County.

I am also writing to directly apologize: For a portion of the race, there was considerable congestion at the finish line.  As a runner, I realize how frustrating any delay can be.  This year’s race grew by 150% and we had more people trying to finish at once than we had anticipated.  However, I am not writing to offer excuses – but to let you know we are working on solutions.  We have already begun to make the course corrections needed for next year to provide more room at the start line and much more room at the finish line. If you have specific ideas, I hope you will write back to me directly and let me know.

I deeply appreciate you sharing your feedback on ways the race can be improved and we will do our best to meet your expectations.  Thanks again for your support.  I hope you have a wonderful holiday season.

© 2016 Dennis Arriaga, dennarr.wordpress.com, & dennarr.com. Unauthorized use and/or duplication of this material without express and written permission from this blog’s author and/or owner is strictly prohibited. Excerpts and links may be used, provided that full and clear credit is given to the author with appropriate and specific direction to the original content. Any linked and referenced items remain the property of and retain the copyright privileges of the originator.
%d bloggers like this: