This past Saturday, I ran the marathon distance of the ZombieRunner Bay Trail Run – MY FIRST FULL MARATHON!!! This was the third edition of this event, put on by Zoom Running Events. The run had three distances: a full marathon, a half, and a five mile and drew a field of 82, 365, and 116 finishers respectively. This was my second Zoom event and simply stated: they know how to put on a fantastic run! (Zoom is a sister org to Coastal Trail Runs, which also does an awesome job on their events – I’ve run one of their events.)

The weather was perfect for a run: cool and partly cloudy. Rain was forecast for about 1200, but I planned to be done by then. I still wore shorts though, but sported my long sleeve tech shirt from the San Francisco Half Marathon and my lite Lululemon running gloves for warmth. There were quite a few runners in long pants and layers. I thought about donning layers, but knew that I’d shed them pretty quickly after the start.

The course was flat and a mix of paved and dirt trails (27 and 73% respectively) that traveled around the Bayland park areas in Palo Alto. Okay, one could say that there was one “hill”, but nothing really to speak of in the scheme of things – it was more of an incline. Those running the marathon simply ran the half route twice. I had never been to this park area before, but do drive by a one mile stretch of the course that parallels Highway 101 every day on the way to work (more on that later.) I tend to zone out while I run, but it did seem like a nice place to go for a run or hike and see the waterfowl and baylands.

This was my “Plan B” race, as I was supposed to have run the Honolulu Marathon for my first full on December 9th. If you’re a regular visitor here, you know that we had to cancel the trip. As I looked for options, this race worked best with my schedule and 2013 training plans (read: gotta get ready for Big Sur in April.) After 18 weeks of training, I was anxious to Giddy Up! At first, I was bummed to be running my first marathon on a small event; but, in the long run, I wouldn’t have had it any other way. I’m a low-key person and this was just right – it would have been interesting to run my first with ~30,000 people; but, in the end, 82 was better.

New “Personal Records” on the Garmin Dash!!!
Since my Garmin measured 26.3, does that make me an ultra-marathoner? HA!

Fair warning: This is my first marathon so this is a verbose post. You only get one “first” and I want to capture everything!

[Recap Soundtrack] Part of my pre-race routine is to listen to my Unbreakable playlist as I drive to the race. This is track one (Outro, by M83), a favorite, and is one of the few songs I hear in my head while I run… I just imagine myself running in slow motion to this music…on the road or on a trail! Click play and read on…

Marathon morning… I woke up, downed my standard plain bagel, took care of “business”, showered, kitted up, and hit the road. I got to the event early and parked close to the finish line – not knowing how I would be after 26.2! I checked out the lay of the land, scored an unused porta-potty (!), and then went back to the car to sit in the warmth (love those seat warmers.) At about 45-minutes to start, I downed a GU, shed my sweats, did some stretches and went for an easy/short jog. At about 15-minutes to start, I downed another GU, then waited. The picture of me killing time, trying to stay focused, and not be too nervous is the only one I took…I was focused. The full and half marathons started together, so when they called for runners, I toed up near the front of the pack so I could start at my desired pace. We got our course instructions and then the countdown: 3-2-1…GO! NO TURNING BACK NOW DEN!

Pacing has been a challenge for me on the last several half marathons that I’ve run (starting to fast, ignoring the pace plan, choking toward the end), so I started out with a goal pace in mind and figured I’d allow myself a -10 second deviation. My goal finish time was 3:48:00 @ a 8:42 pace (based on a McMillan calculation from one of my half marathons), which means I could deviate to a 8:32 pace. That said, I became a watch-watcher to ensure compliance!

Like a symphony, my first marathon can be divided into four movements: two with the soundtrack you’re hopefully listening to (feel free to hit repeat!) and two with this something else (not sure what though.) In short, I didn’t hydrate properly and cramped during miles 17.1 to 20 and again between 22.2 and the finish. A fellow runner gave me a salt tab somewhere on mile 17 which kicked in miraculously at the mile 20 aid station (I never got his name, but thanked him no less than four times throughout the race.) Ah, the miracle of salt and liquid and the human body! 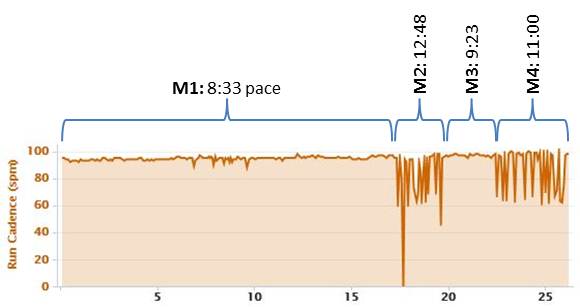 I didn’t really feel the rush of emotion that people talk about when I crossed the finish line, but I did think about my dad, mom, and father-in-law and how proud I know they’d be. I knew I’d see my wife and mother-in-law later (and knew they’d be proud), but not them…OK, maybe I did get a little emotional.

The weird part is that I never really “hit the wall” at the 20-mile mark. Aside from the cramping, which was preventable (and will be forevermore!), I felt great. I had methodically followed the carb-loading plan that I have used since my first half marathon and it proved to be exactly what I needed to maintain energy. Aside from the cramps and some stiffness at the finish, I was walking like a normal person, chatting with my fellow runners, and actually waited for a few of the pack that I ran with during the race to finish. I actually finished ahead of the guy who gave me the salt tab at mile 17, so I thanked him again when he crossed the finish line. I know the “wall” isn’t a myth and I know I’ve hit it in at least one half marathon, but it just never reared it’s ugly head on this race.

Most people were gone as the 5-milers and half marathoners had finished already. As I waited for the results to be updated, I snacked on some food and stretched a bit. I looked at the results and saw that only two people in my age group had finished – I called my wife again to check in and told her that I thought I might get third place! Turns out I did – I was pretty jazzed!

As I have been on my half marathons, I was pretty intentional about these two areas – actually more so…hey, this was the BIG ONE! I followed my usual loading plan – times two.

Bottom line: I’M A MARATHONER!!!! Really, it was a great day and I learned some new things about running. My salt tabs are on order, should arrive this Wednesday, and will always be carried from now on! Also, my daily commute now includes my memory of mile 19…all 15 minutes of it…when I drive through Palo Alto on Highway 101!

Post-race meal: With everything that has been going on in life lately, I opted for a quiet afternoon, with no real post-race feast. We had KFC for dinner and I chilled. I did down a big hot dog and fries on SUnday afternoon, so that was a bit of a splurge.