This past Sunday, I ran the Rock ‘n’ Roll San Jose Half Marathon – half marathon number eighteen for me.  As with all Rock ‘n’ Roll events, it was a great one and big!  The half drew a total of 10,272 finishers.  For the second year, they also ran a 5-mile, “Mini-Marathon”; but this year they did not time it or report results (to the dislike of many, I’m sure), so I don’t know how many people participated in that distance.

The weather was excellent: clear and cool at the start (~54 degrees.)  It probably warmed up to the low sixties at the time I finished. I saw many shedding their layers two to three miles into the race; though I stuck with my standard shorts and tech shirt (I sported my RnR Philly shirt.)  Again, great weather for a run!

The flat and fast course which, according to a fellow runner, has not changed since RnR started coming to San Jose, made its way through downtown, portions of the Rose Garden area, and then back downtown to finish at Plaza de Cesar Chavez. Course marking was excellent and there were volunteers everywhere to make sure people stayed on course – especially at the split where the mini-marathon and the half separated.

Footfalls…nothing but footfalls.  I distinctly remember that between miles 1.66 and 1.78 in the area around Jackson and 11th streets, everything just got quiet and the sound of footfalls was all I could hear.  People were just getting in the zone and no one was conversing – at least in my area.  It was totally cool and peaceful: hundreds of footfalls.  The sweet sound of running.  [Interestingly, I also wrote about this in last year’s race report.]

As with all RnR races (I’ve now run four), on course entertainment was great.  They had the usual “official” bands staged at certain points along the course and there were even a number of people from the various neighborhoods we ran through that were either playing live music or blasting a boom box in their yard.  Some houses even had aid stations, though I passed…  The various cheer squads along the way were great as well – there was even an elementary school cheer squad…I guess they start younger now.

The finish area was laid out great – good flow after crossing the finish line for photos, SWAG, and then hanging out all around Plaza de Cesar Chavez.

As I look back on the races that I have run, the 2013 RnR San Jose was the first course repeat for me [2012 RnRSJ report.]  I’ve run races at the same location, but never the same distance or direction (Brazen’s New Year’s Eve and Day runs are run at the same location, but in different directions.)  That said, hopes of setting a new course PR would have been nice, but really were not realistic given my current training focus on bicycling in preparation for Foxy’s Fall Century on October 19.

So, I switched to a sub-two hour goal, which I was pretty confident I could achieve.  Things went pretty good along the way and I took a total of 18, :30 to 2:00, fast-walk breaks just to go easy on my tired legs.  I didn’t have any cramping this time, which has happened the last few half marathons; but, a tendon on the top of my left foot was starting to bug me by about the nine mile mark.  It had been nagging me all week and at about mile 11 I stopped and loosened my shoelace.  That helped, but it was still sore through the finish…not painful, just sore.  It’s better now (still tender) and I’m not sure what is causing it.

Here are some photos from the day: 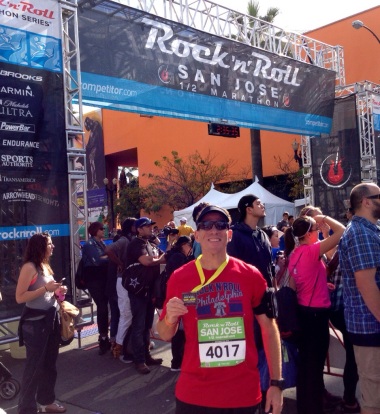 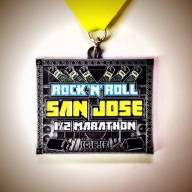 da bling! [not bad looking, but I liked Philly’s better]