Unless you’re a runner* – in which case, they are completely related… 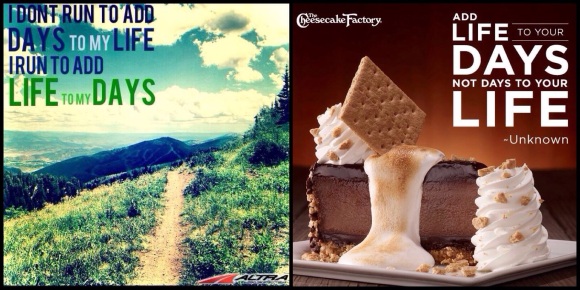 …though a mashup is probably appropriate:

Have a great weekend!

Hmmmm, how to display my 2013 training stats in an epic way….a mega INFOGRAPHIC!

This pup has taken numerous lunchtimes, a few evenings, an extended layover at DFW, and a few more evenings in hotel rooms this week.  It was great remembering and reliving some of last year as I gathered the data and worked on this project.

My numbers may pale in comparison to some, but they are mine…and that is what we all should focus on: our numbers, not other people’s.

These were hard earned, yet fun.  Mostly enjoyable, with a dash of difficult, and a hint of pain.  For certain, 2013 was a great second full year of running, with a decent intro to cycling.  Here’s to celebrating 2013 and anticipating what lies ahead in 2014.

Ah November, back to a run-focused training plan and getting my run-base back. I do miss riding as much as I was during September and October, but I’m a runner and enjoyed this month’s training.

No business trips this month – which was AWESOME!

As far as new equipment & such, none this month.  I did try a new snack bar this month, which came in my Stride Box.  It’s called “That’s it.” and they are great.  They only have two ingredients: “fruit and fruit!” (with apple being the consistent ingredient) and are 100 calories each.  I have not tried all the flavors, but did order a sampler pack – so far, my fav is the apple and cherry.  Check ’em out.

With that, here are the stats for the month that was November 2013.

October 2013 was split in two: final training for Foxy’s Fall Century on October 19th (with a half marathon thrown in) and then a return to a run-focused training plan in preparation for a late fall marathon.  But honestly, Foxy’s was the focus – the culmination of two months of training: 895.13 miles over 51:56:27 (h:m:s:) of invested time.  It was a blast and, even though I am a runner first, I can see myself doing more organized rides in the future.

That said, I’m glad to be back to a run-focused plan, though my run base totally suffered.  Back to the building stage…

I took a quick business trip to Oklahoma City and had two great runs while there [one, two].  It was taper week for Foxy’s, so, rather than riding or running in the hotel fitness center, I mapped out a route around a local lake.

As far as new equipment & such:

With that, here are the stats for the month that was October 2013.  I decided to display a bit differently this month…

From an article titled, “Should You Be Coached?”

“Harry Chapin, in a song called Mr. Tanner, about a baritone from the midwest, penned the line, “he did not know how well he sang, he only heard the flaws.” Some of us train that way. We’re really hard on ourselves. It can be fairly destructive.”

“Golfing legend Lee Trevino is quoted as having said, “It’s not the arrow; it’s the Indian.” “

“Stadiums are for spectators. We runners have nature and that is much better.”
– Juha Väätäinen

I always stick this somewhere on each page of my training plan…it caught my eye again today:

“Do the work. Do the analysis. But feel your run. Feel your race. Feel the joy that is running.”
– Kara Goucher

From the “It’s never too early to start planning!” camp…

Training for it will be interesting though.  I need to hold on training too specifically for it until maybe after the first of the year because I have a marathon in mid-December that will require my focus after next week’s Foxy’s.  Plus, I will need to work the training, and race itself, into my overall training for Big Sur.  Still, I am looking forward to it and hopefully doing a few more duathlons…and possibly a triathlon later in the year.

…with more calendar to fill in order to keep my race-a-month streak going!

September 2013 was all about training for Foxy’s Fall Century on October 19th…  What had been an occasional, Monday-morning alternative to running, became pretty much the sole focus of training this past month: namely bicycling.  I have missed running as much as I was, but the shift was necessary to finish well on Foxy’s.

I have noticed that my running has somewhat improved (speed and economy), though I have lost the base that I had when I was running 30 to 45 miles per week.  That said, I have realized improvement in my cycling skills, speed, cadence, and endurance.  I guess that what is gained through targeted training – DUH.

One thing that has resulted this month as been an increasing interest in moving toward multisport: duathlon and triathlon.  Swimming is still a ways off, but I’m working toward duathlon.  More on that in future posts, but I have added BRicks and sprint distance duathlon sessions (SprintDu) to my Friday sessions.

I had one business trip this past month and took advantage of being in the Philadelphia area and ran the Rock ‘n’ Roll Philly Half Marathon.  It was a great event and added a different element to my trip.

As far as new equipment:
END_OF_DOCUMENT_TOKEN_TO_BE_REPLACED

This multisport thing is starting to grow on me.  The aqua part of triathlon is still looming ominous though; so I’ve been looking at duathlons of late.  I know triathlon will come, just need to figure out how and when…and then make it happen.

Anyway, back to duathlon… Instead of doing my usual, Friday BRick this morning, I did a home version/distance of a sprint duathlon that I’m looking at for early 2014: run 2 miles, bike 10 miles, run 2 miles. I’m actually leaning toward the international distance (10k run, 40k bike, 5k run); but, with only about 1:20 max in the morning for my workout, the shorter distance worked better.

I’ve programmed Friday’s as BRick workouts on my training plans, but I think I may weave SprintDus in the schedule…just to break things up.

Have a great weekend – I know I plan to!

© 2016 Dennis Arriaga, dennarr.wordpress.com, & dennarr.com. Unauthorized use and/or duplication of this material without express and written permission from this blog’s author and/or owner is strictly prohibited. Excerpts and links may be used, provided that full and clear credit is given to the author with appropriate and specific direction to the original content. Any linked and referenced items remain the property of and retain the copyright privileges of the originator.
DENNARR(dot)COM
Create a free website or blog at WordPress.com.
Loading Comments...
%d bloggers like this: